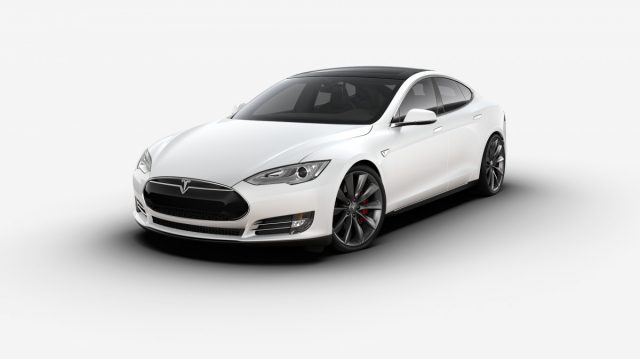 How do you test whether the world’s only real long distance electric car is any use for family life? You take it on a road trip!

I collected the latest Tesla Model S 75D at Tesla’s brand new service centre beside Edinburgh Airport, where it was charged to 100% (you’d usually only charge to 80% to preserve the battery unless you’re going on a long trip) ready for me to drive it back to Motherwell.  Range from full was around 230 miles.

My first drive back along the M8 was pretty uneventful. Having already been inducted into the way of the Tesla Autopilot, I stuck it on and cruised back along the road at 70.

Although Autopilot takes a bit of getting used to it does work well on a stretch of road like this. Hands on the wheel but no steering input needed is not a very intuitive way to drive (it will be much better when you can keep your hands off) but it does allow you to concentrate a little less on the road ahead and a bit more on listening to your passengers etc. Whether this is a good thing or not will be much debated as we move from semi to fully autonomous cars.

With the journey going well we got to junction 6, Newhouse, and the start of the M8 upgrade work. Dropping down to the 50mph limit was no problem for Autopilot but the narrowing of the lanes meant it wasn’t able to control the car anymore and it was back to me. This was a common occurrence over the weekend where England’s motorways seem to have endless stretches of “Upgrading to Smart Motorway” roadworks and one of the reasons I’m not sure we’re as close to being fully autonomous as some experts predict.

Off the motorway network and having a drive on country roads and city streets, the comfort and instant torque of the Tesla make it an effortless and enjoyable steer. It’s not full of steering feel and although the air suspension means the car corners quite flat, it doesn’t encourage you to hustle it. What it does make you want to do is floor it after every corner, roundabout or junction just to feel that surge of acceleration – it is quite addictive. We didn’t have the car long enough to work out what this style of driving does to the range per charge but this would be something interesting to test on a longer loan period.

Anyway, back to the main reason that we borrowed the Model S in the first place – a family trip from Scotland to Centre Parcs, Longleat. Does an electric car with a range of 230 miles make for a pleasant journey when you need to travel 387 miles with a 19-month-old?

The car says we’ll need three stops for this journey: Gretna for 15 minutes, Warrington for 20 minutes and Hopwood Park, Birmingham for 15 minutes. Packing up the car in preparation and we find it has loads of room for the assorted ‘stuff’ you need to take when holidaying with a young child. Lots of rear leg room, a large rear boot (which still has two extra seats tucked away) and a front boot mean we can take everything we need and a few extras you might not have, were you taking a smaller car.

We set off at 19.45 with the greatest of intentions to fully monitor and record the trip: times, charges and everything else. You can guess how well that went…

As we were planning to take turns at driving, and the boss lady is more a morning then evening person, Jen took the first stint from Motherwell to Gretna services. Having already shown her the controls (she was quite familiar since Tesla use Mercedes stalks and switches) Autopilot was engaged pretty much as soon as we got onto the M74. Being that it was dark and a bit miserable, it took a little while for her to trust the system and not just override the steering.  After this period it was, for the most part, just hold on and relax. On this first leg of the journey, one of the slight flaws with Autopilot first reared its head: how the car likes to drive on the left-hand side of the lane. This is fine if you are cruising on the inside lane, but not when you are overtaking lorries on the outside lane. Us humans would usually tend to drive to the right of the lane when on the outside and this is something that Tesla could do with building into Autopilot.

Our first charge of the night went fine but the car did ask us to charge a lot more than the 15 minutes it initially told us – closer to 40 minutes. It would take a bit more time with the Tesla to tell, and this was a theme of the whole weekend, whether driving at 70 was reducing the range or whether other people charging at the Supercharger (this reduced how fast the car charges) were to blame for the increase over the initial plan of 15, 20 and 15 minute charge to reach out destination.

Back in the car, 135 miles down the road and we found ourselves around the back of The Royal Park Hotel at the next Supercharger. This really was not what we were expecting! 12.15am in a dimly lit hotel car park with the rear entrance to the hotel locked, meaning we had to walk around the perimeter with our now awake toddler. With the car requiring 30 minutes of charge this overall, not a great experience and not one that you would ever encounter with a conventional fuelled car. I couldn’t also help wondering what would have happened if two Tesla owners were staying at the hotel and left their cars to charge overnight?

Charged and back on the road again we had 91 miles to travel to our Warrington hotel for the night. This should have been an easy run except that there were roadworks on the M6 and the Tesla satnav decided to avoid these and take us through Stafford. This was easily the worst satnav blunder I have ever experienced and involved us being taken along grass centred single track farm roads. To say we were raging would be an understatement. Google Maps suggests this is a 25-minute detour, but at 1.30am when tired, I think it cost us even more time.

Arriving at the hotel at 3am, we were not in good spirits. Without stops, this is a 3h15m journey.

Feeling fresh from our four-hour sleep we drove a couple of miles to the Birmingham Hopwood Supercharger to have breakfast. Nothing eventful here but it’s not exactly convenient to have to leave the hotel to have breakfast.

The rest of the journey to Longleat was pretty uneventful other than the fact that all the motorways seem to be getting upgraded to “Smart Motorways” where no work appears to be getting done and all the lanes are reduced in width with poor marking of the lines. Autopilot does not like this and did not operate for many of these stretches.

To break up the journey we stopped at another Supercharger, Sainsbury’s, East Filton. This was fine, although I wouldn’t fancy charging here during the night when the store is closed(!) and then the satnav took us another great route, right through the centre of Bath for no reason that I can understand.

When we finally get to Longleat the car gets quite a bit of attention: “I love your car” shouted one enthusiastic boy while hanging out the window of his parents Volvo XC90, and it got plenty of stares from people as it drifted silently passed them. It would have been at this point that we should have parked up at Centre Parcs Longleat’s charging station as listed on their website here, except this park doesn’t actually have one. Nice work Centre Parcs, just as well we had an extra stop on the way here!

After a fantastic weekend, it’s fair to say we were less than excited about the trip home.  It’s a drive that could take 6h30m without stops but it took us 11 hours. Most of this was probably down to traffic and stopping for longer than the car needed to charge, so we didn’t have too many complaints there. The aspect of charging that we weren’t happy about was the final one at Gretna. In a conventionally fuelled car we would have stopped at 5pm for dinner but when driving the Tesla back it made the most sense to stop at 7pm for the Gretna charge, rather than stopping twice. Having a £70k car dictate when we have dinner is not something I thought would ever happen to me.

Getting away from the charging, although it does dominate the experience somewhat, the car was faultless while cruising up the motorway home. Having charged more than required we were able to try slightly higher Autopilot speeds on the M74 and it performed brilliantly. A few more years of development on the software + batteries and the added safety of the computer should mean these cars could cruise all the way up this road (presuming no roadworks) at 100MPH while we sleep or work. Being that runs up the M6/M74 are pretty boring, we had a good chance to play with the gadgets. Reading the news on the massive tablet is pretty good and preferable to using a phone, in my experience. We also loved the built-in Spotify Premium software! “play children’s nursery rhymes”, while pressing the speech button on the steering wheel, was used a few times as a bit of a distraction. The full QUERTY keyboard also made searching for music or web browsing so much easier than in any other infotainment system that I’ve tested.

Journey over and the Tesla is a hard car to rate. The charging and satnav mishaps were an utter pain to deal with at the time, but take them out of the equation and the car was brilliant. The power, the tech and space were all great and would mean this was a great car to live with to commute to work every day or on slightly shorter family trips. Given a little bit more development these problems should evaporate…..until the Superchargers are full of people charging their Model 3s….. Wait, you thought the story was over? I still had to take the Model S back to the service centre the next day and collect my car that I left there. Since I had plenty of spare range I had a bit more play with acceleration runs and really took advantage of the torque surge. All great fun until I realised that I’d left my own keys at home – D’oh! All the way home and all the way back to Edinburgh left me with seven miles of charge left when I arrived. This might be something you get used to, but for a first time Tesla driver I was starting to worry and imagine the phone call that I’d have to make…..