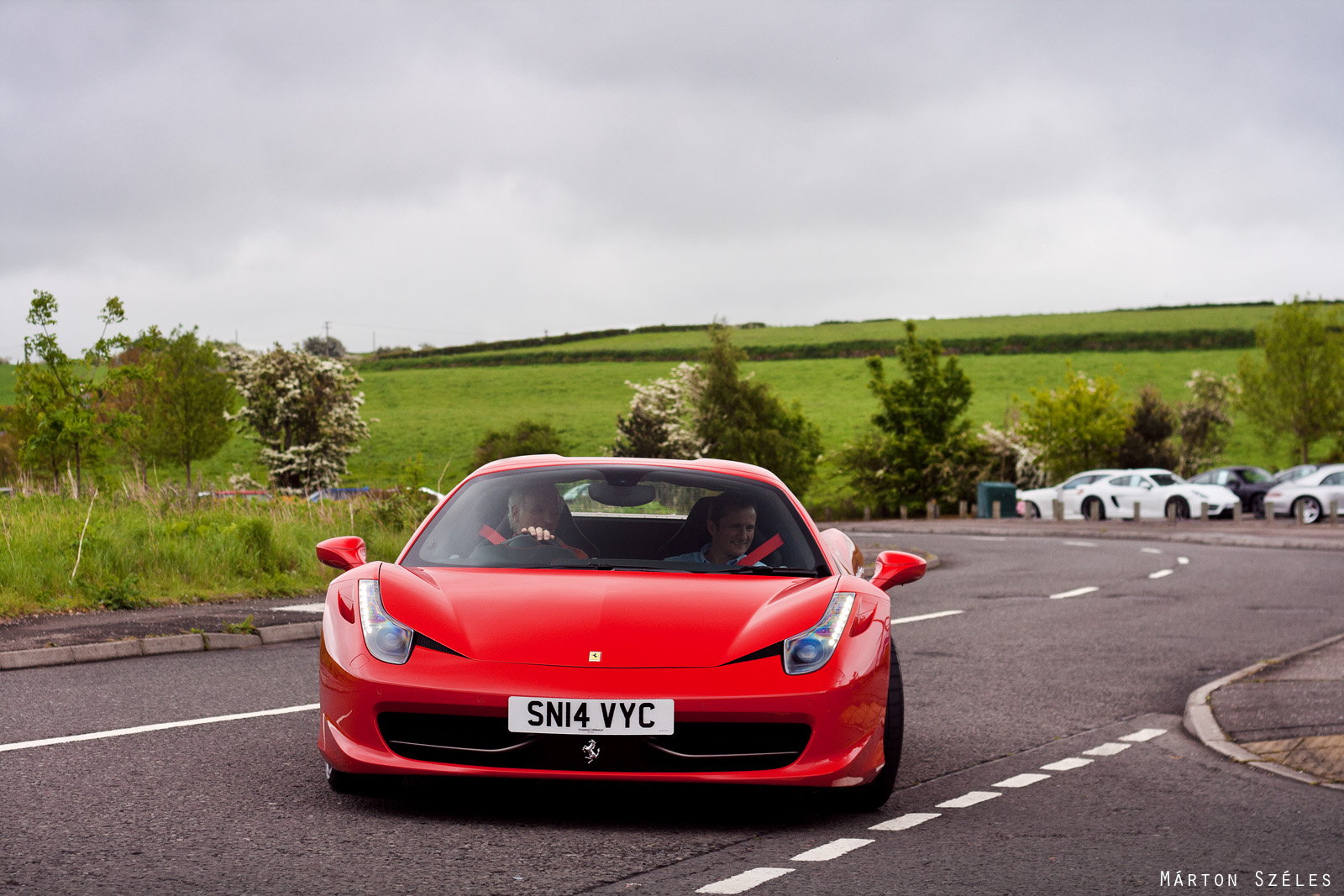 OK so it’s been a good couple of weeks for test drives at TartanTarmac… Following Olie’s visit to Millbrook, Paul’s drive in the Ghibli and John’s experience in the F12, I got to drive a Ferrari 458 Spider and Porsche Cayman at the Decade of Sytner event hosted by Graypaul Ferrari in Edinburgh.

First up was the 458 Spider. Now to say I was looking forward to this is something of an understatement – I’ve always been a big fan of this car and it looked stunning in standard issue Rosso Corsa.  Although dry, the weather was pretty cloudy so the roof stayed up but that meant we could try out a really cool feature which is the fully retractable rear window – all the better for getting a bit more of the engine/exhaust noise while the roof remains up, nice! To start with I left it in automatic mode while negotiating the Saturday afternoon traffic and trying to forget the fact that this was someone else’s £200K car.  The first thing that struck me was how easy it was to drive normally, the 7 speed dual clutch gearbox shifts up quickly & smoothly and the engine is incredibly flexible, perfectly happy pottering along at 30mph in 6th gear.  It also rides extremely well especially given the 20 inch wheels and minimum tyre side-walls.

Once out of the traffic and with the gearbox back in manual mode I dropped it down a couple of gears (accompanied by lovely automatic blips of the throttle) to see what the 570 bhp felt like.  The engine is stunning and lives up to all the hype, having superb throttle response, great power delivery and sounding incredible once the exhaust valves open higher up the rev range on the way to the 9000 rpm red line.  On a sunny day with the roof down it would be pretty hard to beat! The drive was over too quickly but it was long enough to know that if I ever had the means there would be one in my garage without hesitation.  To be honest, one thing I didn’t like was the steering wheel.  While the shift lights in the rim are cool, what is it with the fashion for non round steering wheels? The phase ‘if it ain’t broke…’ springs to mind. This plus the combination of indicators on the wheel but paddles fixed to the steering column all seems a bit counter intuitive, but hey I’m sure I’d get used to it!  Given the recent news that the 458’s replacement will be turbo charged it seems like this could be the last of high revving normally aspirated V8 Ferrari’s… a sign of the times but a very sad thing indeed. After that the Porsche Cayman had the potential to be a real anti climax but surprisingly it wasn’t.  To begin with the test car looked fantastic in bright yellow – in my opinion, much more preferable than the usual greys, silvers and blacks.  This was the standard Cayman with the 2.7 litre 275 bhp engine so while its performance was significantly down on the 458 (to the tune of almost 300 horsepower!) the advantage of having a lot less power is that you can drive the car harder without getting up to silly speeds quite so fast.  The fact that it’s a good few inches narrower that the 458 also means it’s an easy car to just jump in and drive. The PDK gearbox seemed to change a bit smoother than the Ferrari ‘box and in the Cayman the paddles are attached to the wheel rather than the steering column which was an interesting comparison.  Today was the first time I’d driven the latest generation of dual clutch gearboxes and they were both very impressive and I can see the benefits but I’m still not sure I’d choose one over a decent manual.  A lot has been said about the electric power steering on the latest Porsche models but to be honest on this short test drive I didn’t find it a real issue.

I came away really liking the Cayman, it was superb to drive, looks great, built well, had a lovely interior (if a little tight on space) and is something you could easily use everyday. Without sounding like Clarkson, I’d say it was lacking in a bit of power though so the extra 50 bhp of the S model plus the sports exhaust (this one was a bit quiet) would probably make it spot on.

Tell us your thoughts on the 458 Spider and the Cayman over on the forums.