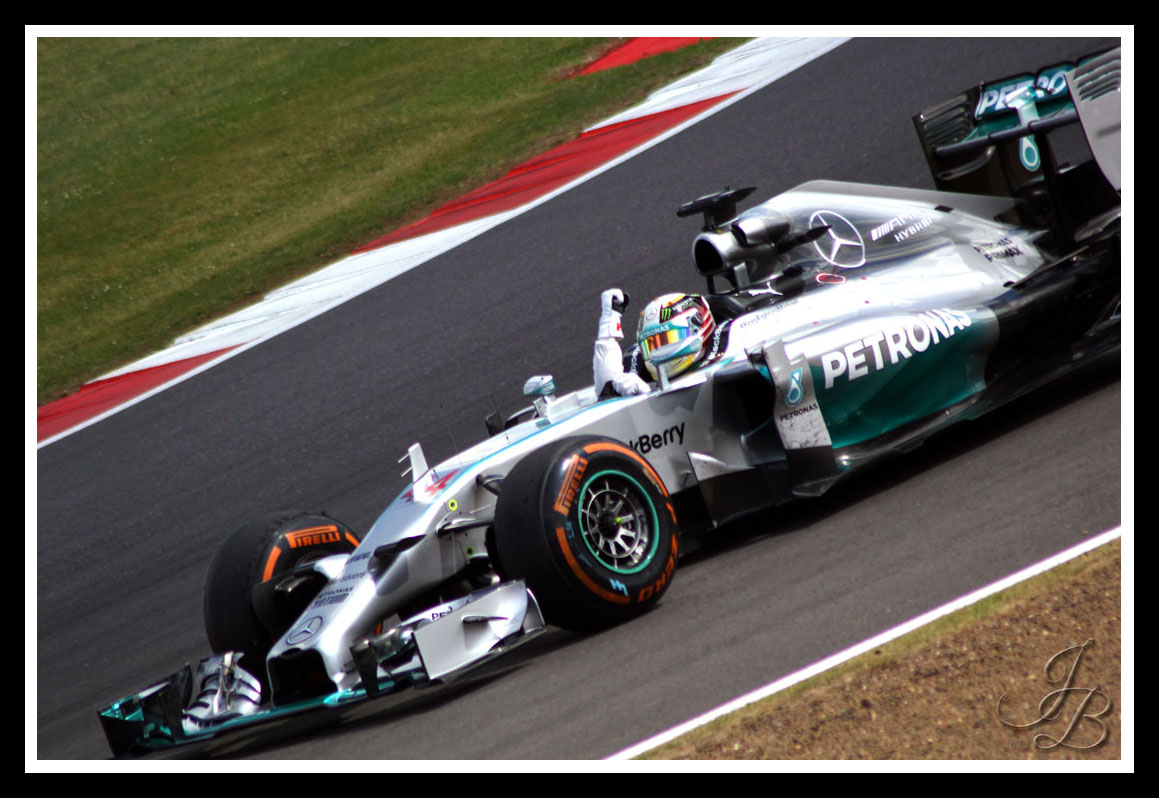 Julie Brown gives us the low-down travelling from the Kingdom of Fife to join the F1 carnival as it stops at Silverstone. This year was my 18th consecutive F1 British GP at Silverstone and Silverstone’s 50th Anniversary. Pitching our tent in the Silverstone Racing Club’s camp-site we settled in for a fantastic weekend of racing. Sitting there in the fresh air and sunshine, with an alcoholic beverage, listening to the Kaiser Chiefs in concert, what could be better than that. Everyone joined in the celebrations this year, there was a fancy dress competition on the Friday and also the Silverstone Racing Club went to town on the decorations of the Club House …even a F1 car made out of balloons ! To celebrate Silverstone’s 50th Anniversary the Pit Lane was opened to the fans on the Thursday. This proved to be very popular with the fans. According to the marshals there were over 15,000 fans waiting in the searing heat just to catch a glimpse of the F1 cars up close. There was a lot of activity in the pits with engineers working on the cars. Maurussia were practising their pit stops to the delight of the fans (even though they didn’t have the engine running). It was a special day for Susie Wolff of Williams who made her Grand Prix weekend début in Free Practice 1 on Friday morning. She is only the second woman to take part in a British Grand Prix at Silverstone in over 20 years (the first being Lella Lombardi in 1975). Unfortunately her first practice outing lasted just 20 minutes and a few laps before the car broke down. The stage was set on the Saturday by a thrilling and unpredictable wet qualifying session, the result of which was a grid with several drivers out of their usual qualifying positions. Hamilton was fastest with just seconds remaining but he decided to abort his final lap because he was down after the first two sectors. Nico Rosberg took pole with Red Bull’s Sebastian Vettel second ahead of McLaren’s Jenson Button, Force India’s Nico Hulkenberg and McLaren’s Kevin Magnussen. No British F1 race would be complete without the thrilling flying display of the Red Arrows. They yet again stunned the spectators by corkscrewing, twisting and painting the sky red, white and blue. The Drivers Parade, not sure what Ferrari think of Kimi hanging off the side of the truck ! Silverstone celebrated its 50th Grand Prix with an All Star Drivers Parade. It included a selection of the most legendary machines to have ever graced the circuit. Drivers included Sir Jackie Stewart, Nigel Mansell, Damon Hill, Johnny Herbert, Emerson Fittipaldi, Martin Brundle, Derek Warwick and Alain Prost. They were driving machinery spanning six decades of the sport, ranging from the late Sir Jack Brabham’s 1960 British Grand Prix-winning Cooper Climax T53 to the Red Bull RB8 in which Mark Webber triumphed at Silverstone in 2012. Nice to see that the F1 Community and even the road sweepers are still supporting Michael Schumacher’s recovery. The race began with a brief flurry of action, then the track fell silent for over an hour. Felipe Massa was making his 200th race start but unfortunately didn’t even make it to half a lap. He collided with Kimi Raikkonen’s spinning Ferrari, who suffered a frontal impact with the barrier at the bridge on the Brooklands straight. He had run wide at the previous corner and rejoined the track down the Wellington straight, lost control of his car and spun sideways into the barrier. He was then hit by Felipe Mass who was unsighted behind Kamui Kobayashi’s Caterham. The Williams driver spun the car as he tried to avoid Raikkonen. The barrier he hit also suffered heavy damage and the race was red flagged for 50 minutes whilst the Marshals replaced the damaged panels. Kimi escaped with nothing more than some nasty bruises from the 47G impact as luckily his chassis remained intact. It was a great pity that Rosberg’s broken gearbox denied Mercedes a grandstand finish. It’s the first time Nico has not been in the top two at a race weekend all season. Hamilton was rapidly closing in on his team mate prior to his retirement so who knows what that outcome would have been. The highlight of the Grand Prix was the spectacular battle between Alonso and Vettel. They slugged it out for more than a dozen laps, fighting over every millimetre of the track. It is a pity that both drivers couldn’t avoid whining as they were hoping for penalties to be given out.

The piercing sound from the old V8 engine has now been replaced by the more dulcet tones of the 1.6 litre V6 turbo. There have been numerous complaints about the quietness of the new engines. The old scream has been replaced by a car that sounds as quiet as the Safety Car! A lot of the spectators seemed to have dispensed with their hearing defenders. Bernie has supposedly promised noisier F1 cars in the future but only time will tell.

Even though Marussia’s Max Chilton doesn’t yet have a car capable of challenging anywhere near the front, the crowd got behind him and were cheering him on every lap. In an interview later on in the day Chilton said that he could hear the roar of the fans when he passed Kobayashi going through Luffield. The applause from the crowd would have been even louder if Jenson Button had managed to complete his late charge and overtake Daniel Ricciardo for P3. Ron Dennis’ somewhat harsh words of ‘must try harder’ obviously worked. With Lewis Hamilton winning his second British Grand Prix, the British fans went home happy. This was Lewis’s 5th win of the season and perhaps a more important one after previously suffering 3 disappointing races in a row. For those of you reading this and thinking that you can’t wait until next year to see and hear cars at Silverstone, this weekend is the Silverstone Classic and TT will be there covering the event for you. We hope to see some of you there…